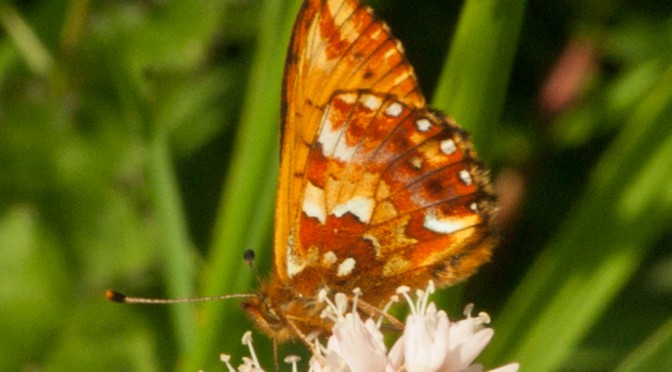 On Saturday, 30th of July, some 14 people met for a field trip into the moor of Hinterzarten. Siegried Kognitzki (SK) was the tour leader.

After introducing development and requirement for forming a moor, SK demonstrated the different zones of a moor and its surroundings. Moor specific plants and animals living in the moor and around were presented. Due to cold weather the insects were almost missing: a single dragonfly was observed. Grass frog larvae are not really moor specific. Along the walk, plants specific for the moor were seen: Vaccinium uliosum (compared to Vaccinium myrtillus), Potentilla palustris, Menyanthes trifoliata, as well as Andromed polifolia. Pinus mugo spp. uncinata/rotundata was compared to Pinus sylvestris, Moor birches compared to usual birches. Typical moor forming plants are and several of them were presented.

Walking around the moor, several grasshopper were found and identified. Finally a single Melitaea athalia (heath fritillary) could be seen.

The afternoon was favoured by dryness, but it was much to cold for end of july. After three and half hours the participants a mixed group of tourist and locals were back at the train station. They thanked SK for this informative afternoon.